The Senators debating the economic stimulus package could do well to learn a lesson in quantum physics. As an object approaches a black hole, it will cross a threshold where the escape velocity [1] (the speed you need to go in order to break free from the massive gravitational pull of the black hole) is greater than the speed of light itself. To an observer outside of the event horizon [2], everything going in appears to stand still, but anything inside will be squashed like a bug.

Government economic policymaking is like piloting a space ship around a black hole. The ship can be made to reach escape velocity and get away safely or it can fall in to the black hole and be crushed under the force of super-massive gravity. In physics, the point just before falling in to the black hole is the event horizon and it is that point our policymakers are about to take us to.

What happens in an economic black hole?

(More on reaching singularity, escape velocity and the event horizon below the jump)

Getting to the economic black hole is not a difficult task from this point, and we should keep in mind that the indicators are frightening to look at. What signals the rush to the black hole is the concept of singularity, or all things go to zero. Here is my list of economic indicators that are converging on singularity right now:

How do you reach escape velocity?

Escape velocity requires having a set of economic policies in place that are capable of getting us away from economic singularity (going to zero). In no particular order, an ideal policy should include:

But the most important components of any capitalist system or any economic system are a functioning banking system and adherence to the rule of law. The latter subject is beyond the scope of this article, but let it be said that part of the financial crisis is a crisis of leadership and failure to enforce one law for all the people, witness the outrage over CEO pay (perfectly legal) or the incredible Madoff Ponzi scheme (allegedly illegal).

The crisis of leadership ties in to the problems with the banking system. The banking crisis is one of solvency [10], not one of liquidity [11]. Leadership does not want to admit this because of the frightening implication if we fail to reach escape velocity and get sucked in to the black hole:

When liquidity is added to a solvency crisis, it only causes the amount of value destroyed to increase in number. This is similar to the gravitational force in a black hole, adding more matter to the black hole does not reduce its gravity. 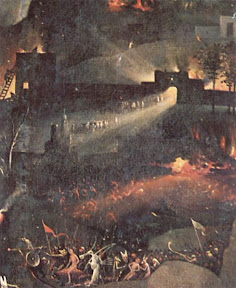 As the Senate dithers on economic stimulus, we become mired in our economic event horizon. To the outside observer, things are frozen in time; markets trade, shopping malls open for business, potatoes still get French fried (or freedom fried [12], as some in the Senate likes to say). But the event horizon is about to meet the singularity of an economic black hole. The debates about tax cuts are quaint, but tax cuts do not matter when there is no income from which to pay the taxes. It does not matter if the national debt is one dollar or one gazillion dollars if we don’t have a single dollar to pay it with.

If we escape the event horizon on the wrong side, we will discover that black holes “come from right out of Dante’s inferno [13]”. Abandon all hope, ye who enter here.

We were just thinking this morning – the mere fact that there has developed an “expectation” that government should address any of our concerns in society is a notion which we should examine carefully. Consider the different reasons for the development of this expectation:

(a) Government does it best;

(b) Government is the only way it can be done;

(c) We abdicated our personal responsibility to handle our own affairs;

(d) By having government do it, we achieve efficiencies which can not be matched individually; and

(e) We pay so much in taxes that we want something of value for our money, and as the amount of taxes paid increases, we expect more for our money.

Some would argue that what we are witnessing in Congress at this point in time is exactly why government should not be allowed to do anything in our society other than those absolutely essential services which can not be provided by the private or non-profit sectors. It is difficult to run any organization, or accomplish any large task, by committee, unless all of the members share the same goals and values. That is obviously not the case with government. We, as a society, have grown to expect the government to perform certain functions; but shouldn’t we be trying to gradually reduce the number of services provided by government, particularly because politicians are intimately connected therewith?