Drop the Partisanship, We’re In It Together

Now is not the time to play a Washington blame game, there will be a time to sort things out when the crisis has passed. Both parties in the House and Senate voted for this under extraordinary pressure, they were taken. Here is the roll call from each iteration of the TARP (the original failed bill and the later one that passed):

With all due respect, the current administration has botched the financial crisis. In short order we have had misdirected bailout funds, inaccurate statements from public officials about the state of the economy, misfeasance toward critical private sector institutions (Bear and Lehman) and now a mass waste of funds while critical time has lapsed.

The sitting administration needs to put together a better financial stabilization plan or else get out of the way. We will write up our ideas in an upcoming post, but in brief this plan should include:

My belief is that the Obama people are working on this [4], but there is the constraint that he is not President yet. My fear is that we don’t have until January 20 [5]. 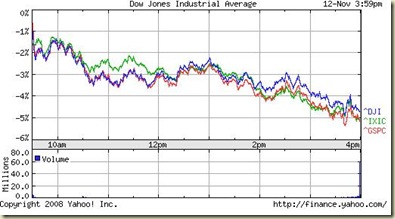