With an historic election over in the United States, it is time to get back to tackling the problems of energy supply and rising cost. A number of plans are up for discussion ranging from the benign to the radical. In order to evaluate the full spectrum of what can be done in the energy space, we must first turn our attention on how energy works and how we use it. In this multi-part post, I plan to discuss this issue as a prelude to what we can do about energy:

Today’s oil price with gyrations up to the $150/bbl mark and back needs to be explained in the context of two simple ideas: peak oil [2] and coopetition [3].

While the time and date of peak oil production is still up for debate, the hard statistics about oil use and how much we have left are not. Current global production [4] is approximately 83 million bpd (barrels per day). According to the British Petroleum Statistical Review [5], the amount of probable oil reserves left on the globe (this includes the Canadian oil sands) is 1.39 trillion bbl. In other words, at current production levels, we have enough oil to last us for 42 years. The main point here is not to scare, but to emphasize that oil doesn’t just spurt up from the ground. Actually, it does, but not so much that it comes up for free.

This is where peak oil meets game theory. There are a few things that need some explaining. First, we have to understand how an historic run up and down in oil prices can happen (see chart below, Source: US DOE). This involves understanding the mechanics of the oil market trade. Second, we need to understand the game theory oil traders use when making their trades. Finally, we can tie this together with peak oil. 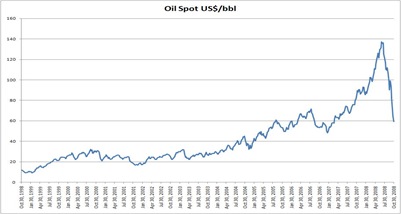 I. How Oil Is Traded

Oil is not traded as a spot commodity, but as a future [7] (a financial contract priced based on future expectations requiring delivery at a time in the future). The traders active in the oil futures market are usually financial investors with no interest in the physical commodity. As part of the “delivery” aspect of the futures contract, they will generally sell their contract to a buyer like an airline or refiner a few days before the contract expires.

Because so much of oil trading occurs in the futures market as opposed to a spot market, there is a debate as to whether futures prices control spot prices [8]. When we explore the game theory aspects of the oil trading market, we see how it is in a supplier’s interest to use the futures price to determine the spot price.

First, we must play a game. In business school, one of my professors described the following type of card game in his book Coopetition [9]. Take a deck of 52 cards, divide it equally giving one red card to each of 26 students and all of the black cards to the professor. The object is that for each match (e.x., two aces, …) the school will pay professor $100, so professor has to negotiate a deal with each student to buy their red card.

The first scenario is pure cooperation, there are 26 cards. For the first 25 cards, professor can negotiate a 50/50 split, but student #26 knows professor can do nothing without his card. Unlike the other 25 cases, professor’s last card is worthless without student #26’s card. So how much will professor accept? The answer is probably lower than 50/50, there may be some moral point below which professor will stop, so professor will not take one cent, but professor might take $10 or $20, instead of $50.

The second scenario is what my professor called coopetition (cooperation mixed with competition, a branch of game theory). Here it is the same game, except professor rips up one of his last cards, leaving him with 25 cards, not 26. We have the same outcome for cards 1-24, but what happens when professor gets to negotiating with students #25 and #26? A bidding war breaks out! Since one of the students realizes that she will get zero for her card (professor only has one card left), each student will be willing to take a low price for their card, again down to some moral level. So now professor’s outcome is $80 or $90 for card number 25, though he will get zero for the non-existent last card.

The card ripping game above is how oil suppliers routinely manage the oil market and why suppliers and speculators in the role of the professor prefer to trade in futures markets where “card ripping” is much easier to accomplish to maximize gains. Keep in mind that that commodity card game described above would be much harder to accomplish in a spot market where suppliers sold directly to end users for a number of reasons:

Now we need to ask a couple of questions to understand the role game theory plays in oil pricing and peak oil:

1. Does peak oil mean that oil prices are on a steady climb up? No and yes. First, most people, even seasoned economic observers [10] misunderstand the implications of peak oil because they either don’t know [11] how oil is traded or they haven’t considered game theory [12]. Peak oil means that supply distortions allow producers more room to maximize gains by playing cards with the futures markets as we described above. However, this is a dangerous game where peak oil factors in. If the card game becomes too expensive, bidders will simply walk away and the game will collapse. Inevitably, peak oil tells us that in 30-40 years geological reality will end the boom-bust cycle of oil pricing with . . . one boom that is so large it leads to the final bust where no sale is made.

The idea that oil prices will cycle, rather than rise, for the foreseeable future serves no particular political or economic interest (other than futures traders – who keep this a secret), that is why few write about it. Oil will run out, it’s a finite substance, but think about other products that have run out in the past, did their prices reach near infinity? No. They cycled as diminishing returns set in.

2. Can curbs on speculation end oil price rises? Direct curbs will not end oil price rises, but regulation can mitigate the effects of a price bubble. A price rise is caused by simple supply and demand, regardless of whether that is in the spot market or the “card game” futures market. The difference is that the futures market moves faster and influences the spot market price, this is where regulation can help, though we must be careful to know the difference between bad expansive regulation and simply making what we have work better.

Better regulation includes increased collateral requirements, periodic bans on margin, standardized and transparent resource accounting practices (one of the problems with the oil industry is actually trying to count oil in the ground [13]) and consideration of a Tobin Tax [14] to reduce volatility.

3. What about using alternative energy and getting big users like the United States away from their addiction to foreign oil? I will address this in Part 2: Why Alternative Energy Is More of the Same and Why It Is Not.

V. You Got to Know When to Walk Away

The most important thing we can do about oil prices is leave the card game. In Part 2, I will address why alternative energy is in many ways duplication of the same problems we have now, but why the right alternative energy policies are getting us to walk away from the oil futures card game. It is this card game of the oil futures market that underpins much of our politics, economics, foreign relations and global finance. To beat the house is impossible, to leave the card game is to win!