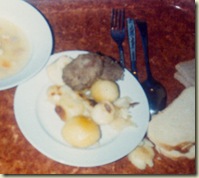 A few newspapers recently dared to describe the U.S. recession of 2008 with the d-word [1], depression. While the problems across the globe have yet to approach the seriousness of a depression, I thought it might be valuable to share my observations of having lived through a stock market crash [2] and subsequent depression [3] not too long ago.

But how could someone who isn’t at least 85 years old know about a stock market crash or a depression? Easy, one happened in Russia [4] and many other emerging markets between 1997 and 2001. While there aren’t millions of us “survivors” back working in Western markets, there are probably enough of us to swap stories with veterans of the Great Depression [5] of the 1930s.

I. Déjà Vu All Over Again

In the fall of 1997 the Russian Trading System (RTS) Index of top liquid Russian shares traded in Russia hit a peak value 571.66 in US Dollar terms. By early October 1998 the index would make a low at 38.53. 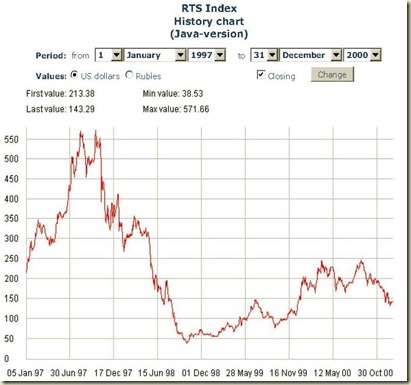 The market declined 93% from peak to trough in one year for a number of reasons, many of which U.S. and other global investors will find similar to the situation now:

What the U.S. and other countries face is not necessarily what Russia faced in 1998 for a number of reasons. Chief among them is that the U.S. can apply massive resources to tackle the problem and the U.S. has more and better infrastructure than Russia did at the time. While historical accounts from the 1930s [10] are important, it may be worthwhile to look at how events that have happened in the recent past could occur in a real depression.

Whether credit or debit, much of modern society depends on plastic transactions. In 1998, after the August debt default and collapse of most banks, Russian debit/credit cards were frozen (note that few “credit” cards existed at the time). To highlight the problems this caused, here is the story of one of my friends who was nearly separated from his family due to the crisis.

K worked as a banker in Moscow, K’s family lived and worked in Africa. K reserved a plane ticket to go to his family at the end of August 1998. He had the money in his account to pay for the ticket, but when the crisis occurred, all of these funds were frozen, as was his card. The airline would not accept payment in cash, only debit/credit cards. K was lucky in that since most Moscow ATMs were closed, I needed cash and he needed his plane ticket. I purchased the ticket for him with my working U.S. credit card, he paid me cash in roubles. K got to visit his family, I made my rent payment.

A few days after the default and devaluation, I took a client of our bank to a local hotel for dinner. The dinner was relatively inexpensive on first appearance. Most menu prices still quoted dollar-equivalent prices, though by law all charges were in roubles at a specified exchange rate. The dinner was around 60 U.S. Dollars. However, credit card transactions don’t actually post for a few days, and as the rouble/dollar rate recovered slightly during that time (at least the spread between the hotel and the credit card did), the dinner charge in the end wound up being around 75.

There are a few things that we can learn from the Russian experience in 1998. The top prognostic indicators are:

If the worst does happen, there are a number of things we can do. Thinking about the positive makes all of the scary 1930s images the media throws at us a little better.

IV. Not the End

One of our traders in Moscow during 1998 summarized the plunging market this way, “well, there were just more sellers than buyers today.” Remember that the market can make you rich, it can also make you poor. One thing it cannot do is make you happy, I think our trader was trying to tell us that. Another thing to remember is that on other days there will be more buyers than sellers.