A few readers asked me to expand on the tips I offered in the last post on Stories from a Recent Depression [1]. I will do that a little further down in this post. Before we get there, there are two “D-Watch” [2] issues I’d like to bring up, one from long ago, one more recent.

Actually the Severus most important to modern finance is not Severus Snape [3] from J.K. Rowling’s [4] extensive Harry Potter [5] series, but Alexander Severus [6], Roman Emperor from 222-235 A.D., whose death touched off the Crisis of the Third Century [7] and near collapse of the Roman Empire. If only only Alexander Severus been able to conjure a Patronus Charm [8]!

Let’s sum up, Severus [9] was born in 208 A.D. When he became Emperor in 222 he inherited a growing and prosperous Empire. A military defeat, graft (bribing the Germanic invaders), economic over-expansion and low morale led to a plot by Severus’ troops to murder him in 235.

After Severus death, the Roman Empire suffered economically from hyperinflation. The solutions of the Crisis of the Third Century [7] were counter productive. The Empire saw increased taxation, abandonment of property (to avoid taxation), crumbling infrastructure and collapsing trade. It was not until the ascension of the Emperor Diocletian [10] in 284 that the Crisis finally abated.

Scholars have written encyclopedia volumes on the causes and effects of the Crisis of the Third Century, but a short list relevant to readers of Global Finance Net is this:

I’ve decided to start a depression watch or “D-Watch” given the recent main stream media (MSM) [11] penchant for scare stories about the Great Depression [12] in the U.S. First, here is a short list of MSM articles that make our D-Watch list for today:

Aside from the macabre thrill of keeping tally of our new global D-Watch pastime, my opinion remains that all comparisons to 1929 (or corrected to 1931 or 1933) are worthless. First, few economists and financial advisors know what they are talking about [16] and I guarantee that none of them can predict the future [17].

That said, it is better to use reason and induction to at least come up with theories or scenarios of what might happen. We should focus on simple things where we can see what is happening.

Most of the U.S. market downturn can be summed up in one word – debt. The fact is that the U.S. is faced with a problem similar to that which led to the Crisis of the Third Century and that is our debts far exceed our ability to produce our way out of them. Forget repayment, given an infinite time horizon, all debts can be repaid. The problem is that we don’t have infinite time and we don’t want our production deflated by the burden of crushing debt.

One chart making the rounds on the Internet is the U.S. Total Credit Market Debt to U.S. GDP from Hayman Advisors. See for yourself (from Clusterstock [18]): 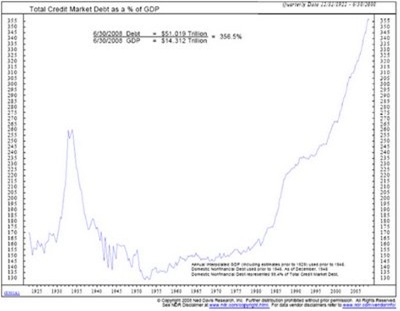 The chart illustrates one very simple possibility for the markets in the U.S. – we are heading back to levels not seen since the mid-1980s because of the need for a reduction back to a 150% debt burden. Obviously, there are a lot of details behind this simplistic conclusion. Who holds the debt? How long will it take to unwind? Who declares bankruptcy? And so on . . .

We can put the debt chart with our Dow history charts from the earlier Charts to Show That Markets Don’t Always Go UP! [19] post. The Great Depression debt bubble lasted between roughly 1928 and 1941. Our Dow Jones chart for the period [20] shows that the average settled around 175 after falling from the 1929 high of 381, a 54% loss. Likewise, we see that the debt ratio reduction was from 260% to around 135% (though it vacillated back to the 160% level, probably due to WWII). Put the two together, a 50% loss in the market from peak matched a 50% deleveraging relative to GDP.

This is probably the most realistic driver of an 80% change, and the driver is what wakes me up in the middle of the night, GDP contraction [23]. Depending on the degree of denominator compression (that is the top number – debt – stays fixed or grows, the bottom number shrinks), we could get to a 400% debt/GDP ratio. Let’s assume a 10% GDP contraction [24] drops 2009 GDP from $14.3 trillion to $12.9 trillion, let’s also assume debt doesn’t increase. Our new ratio would be 395% and reducing to 150% is a larger reduction.

Could this happen? We’ve laid out the assumptions above and believing that both GDP will contract while debt increases is probably reasonable. Believing that this will negatively impact the market is probably also reasonable. The question is one of when and how much and this is where fortunes will be made and lost.

I promised some tips for what to do and here they are. First is to think and analyze. One article I cited above noted the end of financial experts [16]. I don’t think advice or expertise is going away, I’m certainly not anti-intellectual. I do think that people will become more discerning after both the dot-com bust and this crisis, we will all need to know the difference between real advice and “the stopped watch is right at least two times a day.”

Second is a group of things I experienced in Russia during the 1990s. As I said in the last Stories from a Recent Depression [1], I think more recent economic crises hold better lessons than 1929.

The Central Bank of Jamaica seems to have the right attitude (from The Big Picture [27]): 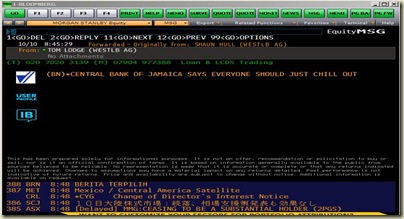